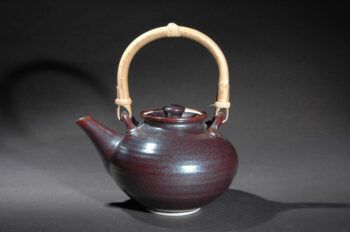 For over 40 years, Daniel Vito and Donna Hetrick have been potters, gallery owners, and teachers in Pittsburgh, Pennsylvania. They feature their own pottery in their gallery along with work from other regional and national potters and glass blowers.

They also offer pottery classes in their studio, where they share their skills and glazes with over 80 dedicated students ranging from beginners to professionals.

They are noted for their gorgeous glazes and pottery that transcends functionality. Their work is a pleasure to touch, adorns tables and living spaces, celebrates cooking and serving, and can make the simple act of eating a bowl of soup or having a cup of coffee a more pleasant experience. Zen, Feng Shui, Wabi-sabi, and tactile/visual pleasure happen.

A lifetime of experience has allowed them to become masters of their craft. They can make the difficult look easy. And they have learned that one lifetime is not enough when you love your work and are constantly growing and learning.

"Whether you want to buy pottery or take a pottery class, Fireborn Studios is the place to go in Pittsburgh. The gallery showcases Dan Vito's work but also sells work by other local potters and has a good selection of handblown glass. Pottery classes are offered during the day or in the evening. The instruction is fabulous, the glaze selection is extensive, and firings are consistently spot on."

Open Tuesday through Saturday noon to 5

Shoppers may park in our loading zone, on 24th street right next to the Gallery. There is also plenty of on street parking nearby. Parking is easy.

We have extensive measures in place for Covid mitigation. READ MORE

Pittsburgh institution Fireborn Studios is launching a new series of workshops at their Southside studio.  Owners Dan Vito and Donna Hetrick are potters, educators, and business entrepreneurs who have thrived in a partnership and marriage for over three decades, a veritable success story in how to carve out a life as working artists.

Fireborn’s expansion to workshops comes as part of a long organic development that enabled the studio to evolve over time.  Hetrick says, “Our goal was always to have lives as potters without the need for outside employment.  Getting there required many baby steps and transitions.”  When the couple met in the late 1980s, Vito had been making pots and doing shows for many years.  An elementary teacher in the early 1970s, Vito found his way to Pittsburgh’s Manchester Craftsman’s Guild and met its founder, Bill Strickland.   “Bill invited me to learn,” he says, “and I loved it.”  By 1980, he had purchased a building on Sarah Street, was producing work, and doing the retail show circuit in the summers.  “I was committed,” he recalls, “and began to rent space to other potters.”

Hetrick is a graduate of Edinboro University’s Ceramics program.  “When I met Dan,” she explains, “it was clear we had very similar visions of what our careers would look like.”  The couple launched Fireborn Studios in 1986 and within two years married.  Hetrick dropped her full-time job first and worked full time in the studio while Vito continued to teach elementary school.  Within two years, he was able to take an extended leave of absence

and eventually take early retirement from the school district.  Vito’s gradual withdrawal from outside employment allowed the couple to ease into their goal of being independent potters.

During these early years, Vito and Hetrick worked to develop a line of pottery.  The studio is known for its distinctive glazes, which Vito has worked doggedly over the year to perfect.  It was a time of copious production, developing new forms, designs, and glazes.  Hetrick explains how they sold through “wholesale production,” presenting their samples at large art shows and taking orders from craft stores and galleries.  “We came home with thousands of dollars in orders,” she recalls, “and had to work out all the details of filling them.”  Vito says, “It ended up being very valuable for us because we honed our technical skills.”  Hetrick remembers firing all the time, getting better and better at making consistent, flawless pieces.

As the couple’s personal lives changed with the birth of their son in 1993, so did their business.  Hetrick found that her associations with other mothers through her son’s school presented opportunities for teaching children.  “Mothers were asking me to teach their kids and I did some small classes,” she says.  “By 2005 or so, we were getting older, college was coming up for our son, and we were focusing on things like health insurance and tuition.  I realized one of us might have to get a job.  It was time for a new transition.”

This time it was Hetrick’s turn to teach school.  “I felt okay with that,” she explains.  “It was a partial year commitment, with summers off – it merged well with our business.”  When she left the studio to teach art in the Pittsburgh Public Schools, her parting words to Vito were, “Do your own thing, don’t lose money, run Fireborn and get out of wholesale!”  Vito did just that.

Vito launched an extensive teaching program at the studio, which has grown over the years into a strong, cohesive community.  He set up 16 wheels, continuing with his own production during the day and converting the space for evening classes.  “We don’t offer beginning/intermediate/advanced classes,” he explains.  Having more experienced students work side-by-side with newcomers encourages creative interaction.  There is a cadre of return students, always expanding with new learners.  Fireborn employs four to five instructors, along with a studio manager, providing opportunities for new young potters.

During these years, Hetrick says, “Dan’s voice has grown beautifully.”  He continues to study glazes.  “I realized early on that I am attracted to the traditional catalogue of high-fire glazes,” he says.  “I’ve traveled over the world, looking at collections.  I think I have the MET collection memorized!”  Hetrick calls him a “relentless experimenter.”  He fires high, to cone 11.  “It makes the glaze runnier,” he says, “but I like the look.”

With things stable at the studio – classes providing a steady income – and things at home in a new phase – college finished for their son – it was once again time for another baby step transition: Hetrick’s return to the studio.  “I was ready to have the same opportunity that Dan had had,” she says.  The third floor of the Sarah Street property was converted into a private studio for Hetrick, where she now focuses on her own artistic vision.  With a strong background as a hand builder, Hetrick focuses on surface, texture, and details.  She says, “I want my pieces to communicate the incredible versatility of clay, its plasticity and its strength. Each piece is a record of all that has happened to it, where I have touched it with my fingers or other objects or tools, a reminder that once the clay was soft.”

With both potters coming from a mature place in their art, they are ready to impart that experience in a workshop setting.  Eight workshops are scheduled through October of 2022, each with a specific skill or objective as its focus.  Vito says, “We did some workshops in conjunction with the NCECA conferences when they were in Pittsburgh, and I liked the singular focus.”  These sessions will give students a chance to zero in on a skill that is of interest to them, with topics such as Lids, Attachments, or Stencils.  Hetrick and Vito see the addition of workshops as a natural extension of their in-studio classes.

When asked how she and Vito managed to be successful as working potters, Hetrick’s first response was, “It works better with two people.”  This duo stands as a paradigm of cooperation, each stepping aside in turn for the better of the whole, over a long and supportive life together.

Cost is $35; $30 for past and present Fireborn students

The schedule is as follows:

Visit www.fireborn.com for updated schedule, to register, and to learn more.